New End-Users Agreement of NMVS Use

The Board of Directors of Národní organizace pro ověřování pravosti léčiv, z.s.  (National Medicines Verification Organization - NMVO) has approved the new version of the Agreement for the Use of the NMVS by End-Users. The changes reflect some requirements formulated by representatives of European stakeholders (including pharmacy and wholesaler organizations), while some changes respond to the development of the system and legislation. For these reasons, the Agreements were gradually updated in other EU Member States as well. These changes improve the conditions for End-Users in terms of the protection of their data and the handling of the data in the NMVS.

In particular the following changes have been made:

In the upcoming weeks, all NMVS End-Users will receive a letter with instructions on where and how the Agreement can be signed.

The template Agreement is already available at the NMVO’s website  here. 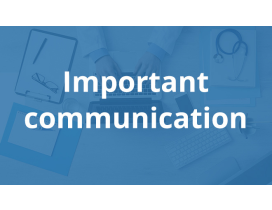